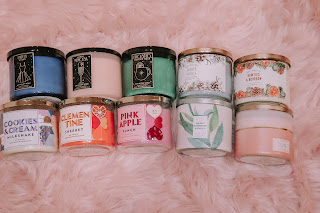 Immediately after Candle Day, BB&W (which should literally come to nobody’s surprise that it is one of my favorite stores of all time besides Victoria’s Secret and the Pink store) had a sale where all candles were $15.95…and of course I ended up buying 10 more candles. Here are all the candles I bought…
From the Roaring 20s collection which I had to order online because my store didn’t have it, I got Frosted Moscow Mule, Party Dress, and Merry Mimosa. Merry Mimosa and Frosted Moscow Mule are my favorites as Merry Mimosa smells slightly like Champagne Toast but more fruity and Frosted Moscow Mule smells like a muted citrus candle.
BB&W also had a Christmas Wallpaper collection, and from that line, I bought Smoked Vanilla and Bowties and Bourbon. Bowties and Bourbon smells like orange cider, and Smoked Vanilla smells like burnt vanilla beans.
From the summer collection which was actually available in stores, I got Cookies & Cream Milkshake, which smells more like chocolate than actual Oreos, Clementine Sherbert, which smells like an orange creamsicle, and Pink Apple Punch, which smells really fresh and fruity due to the apple note.
BB&W also had another summer collection, where there were 4-5 candles in that collection, so I picked up Sweet Rosemary & Vanilla which smells sweet but not overly sweet, and Peach Tea & Vanilla, which smells incredible.
Have you bought any new candles?