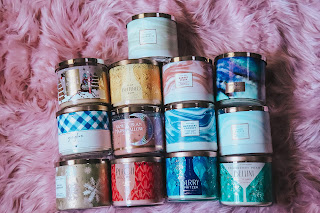 With my growing collection of Bath & Body Works 3-wick candles, can you believe I just participated in my first ever Candle Day sale? Candle Day is a day (usually around the first week of December) where all of Bath & Body Works’ 3-wick candles go on sale for $9.95 each-the cheapest they’ll get other than the BOGO sales they have occasionally. I took full advantage of that sale online and ended up with 13 candles in my arsenal. 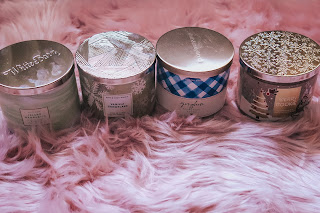 These four candles are Island Margarita, which smells really good-mainly like pineapple and a bit of mango, Vanilla Snowflake, which I have a single-wick of and smells really gourmand and good, Gingham, which I also have a single-wick of and smells fruity and a bit floral, and Merry Cookie, which smells like a straight up sugar cookie. 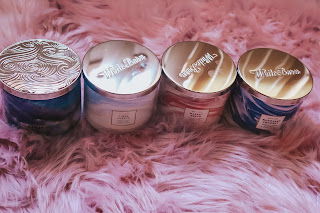 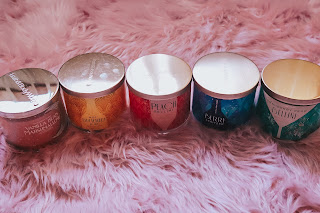 The last five candles are Vanilla Bean & Marshmallow, which smells like a slightly less sweet version of Vanilla Snowflake, Peach Bellini (Roaring 20s packaging), which smells like sparkling peaches, Hot Buttered Rum, which smells less strong than Butter Rum Eggnog, Berry Spritzer, which is my personal favorite as it smells like a mix of strawberries, blueberries, and blackberries, and Cranberry Pear Bellini, which also smells quite fruity, but the cranberry note gives it a fresh zing.
Did you participate in Candle Day this year?