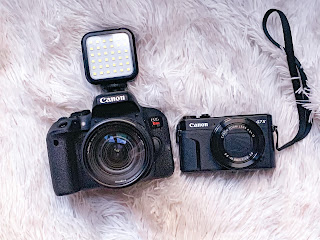 I’ve officially had my babies, my Canon T7i and my G7X, for one year, and here’s what I think of them now. I had some initial thoughts on them in a now deleted post (because I hated the way the photo looked and it was just a blurb).

Initially, the T7i seemed like your average DSLR. I got mine in a little kit that came with a lot of stuff, including a tripod, a battery charger, and a light for night time photography. The kit also came with several disk-like lenses that screw onto the actual long lens as well, so I am able to take close-up photography without having to buy a new lens. However, I did buy a new lens so I could take macro photos, but I don’t really use that lens. Instead, I focus more on using the lens that came with the kit. The T7i also has video recording abilities, but I rarely use them.

The G7X was my go-to for Youtube videos, and for on-the-go photography, but it’s mostly been used for filming at-home videos, mostly of stationery hauls. It’s quite good, but it has some problems with focusing on smaller things, and I have to tap to focus once or twice every video I film, however, it does the job. I, however, think it makes a better travel/city life photography camera than an actual vlogging camera, but that’s probably because I don’t like vlogging as much as photography. I got my G7X as part of a video making kit that came with a spare battery, a charger, a spare memory card, and a portable mini tripod.

Overall, these cameras are pretty good. I tend to use the bigger one for blog photos and close up photos, and the smaller one for out of town photos, or when I simply don’t feel like carrying my T7i. These cameras are a lifesaver for my blog, and although I can’t afford the fancy lenses that every other blogger seems to have, the one provided in the kit has served me well.

What camera do you use for blog photos?